Pan the Submerged Continent of the Pacific Ocean

The existence of a vast submerged continent in the Pacific Ocean has been the subject of popular speculation since the writings of Churchward on the "Lost Continent of Mu". But before Churchward's popular books were published in the first half of the twentieth century, the existence of a continent that sunk beneath the ocean has been a part of myth and legend among ancient peoples in all the continents of the world.

The actual location of this long lost continent, its size, its inhabitants and how it came to be sunk beneath the ocean has been revealed in the book Oahspe first published in 1882. Since the publication of this extraordinary revelation, evidence that supports the actual existence of such a continent in the location described in Oahspe has been discovered. The recognition of what this evidence truly demonstrates however remains to be actualized among the general population of researchers and scientists. In this article and the two related articles that follow, some of that evidence will be examined. Such evidence was not yet discovered at the time of Oahspe's publishing, and the technology used to discover the facts was not yet invented either.

As geological scientists pondered and tried to explain the nature of the earth and its makeup, the earth's crust beneath the Pacific Ocean with its underwater mountain ranges and deep trenches has been the subject of various scientific theories of plate tectonics. Since the recent unexpected discovery of a vast quantity of underground water in the lands around the Pacific Rim, enough to fill a large ocean, Geological scientists continue to attempt to explain the anomaly with plate tectonic theories. But the true cause and extent of the submergence remains a mystery to oceanographic scientists. The following reports extracted from National Geographic news articles point to evidence that some extraordinary event caused an enormous quantity of water to find its way beneath the land surrounding the Pacific Ocean --- in the very place where Oahspe describes the location of the huge sunken continent:

||A giant blob of water the size of the Arctic Ocean has been discovered hundreds of miles beneath eastern Asia, scientists report....

The water is locked in moisture-containing rocks 400 to 800 miles (700 to 1,400 kilometers) beneath the surface. "It isn't an ocean. [The water] is a very low percentage [of the rock], probably less than 0.1 percent." Given the region's size, however, that's enough to add up to a vast amount of water.

Wysession and former graduate student Jesse Lawrence discovered the damp spot by observing how seismic waves from distant earthquakes pass through Earth's mantle. The wet zone, which runs from Indonesia to the northern tip of Russia, showed up as an area of relatively weak rock, causing the seismic waves to lose strength much more rapidly than elsewhere. [Wysession believes] the water got there by the process of plate tectonics, in which sections of the Earth's crust shift. This process caused the ocean bottom to be pulled beneath continental plates all around the Pacific Rim....||

The following explanation involves a new theory to try to explain this extraordinary discovery of such a vast quantity of underground water. Geologic researchers believe a "cataclysm" caused the subduction of an oceanic mountain ridge beneath the continental plate of Asia, with Japan acting as a stopper preventing further subduction and maintaining stability.

|| A cataclysm 50 million years ago changed the face of the planet from the Hawaiian Islands to Antarctica, according to new research. The collapse of an underwater mountain range in the Pacific Ocean turned Australia into a warm and sunny continent instead of a snowbound wasteland and created some of the islands that dot the South Pacific today.

"We have found that the destruction of an entire mid-ocean ridge, known as the Izanagi Ridge, initiated a chain reaction of geological events," said Joanne Whittaker, a doctoral student at the University of Sydney's School of Geosciences who led the research. Using geophysical data gathered by scientists from Australia and Russia, the team confirmed that the ridge plunged underneath a plate of Earth's crust that stretches between the Korean Peninsula and Japan. The Japanese landmass then acted as a vast plug in the crack between the plates, changing their movement and rearranging the geography of the Pacific, the team found.......||

But we have a description of something far more significant in Oahspe - the sinking of a vast continent. More evidence of such an event became available as technology developed undersea topographic mapping. This made it possible to examine the ocean floor of the Pacific where indeed evidence supporting Oahspe's description of the sinking of the great continent can be recognized. Deep trenches which almost follow the same outline of the ancient continent shown in the map published in Oahspe are clearly seen in modern day undersea maps. Maps of these details did not exist at the time of Oahspe's publishing.

Apart from the deep trenches along the northern and western borders, the deep trench to the south (north of New Zealand) called the Tonga/Kermadec trench begins a series of 'Fracture Zones' (Udintzev, Eltonin, Challenger, Clipperton, Clarion, Molokai, Murray, Mendacino,) that stripe the South Eastern and North Eastern Pacific in a wide arc. This arc follows the Eastern contour of the outline of Pan as shown in Oahspe and ends in the Aleutian Trench in the far North. The fracture zones (Udintzev and Eltonin) that run along the long eastern rise toward the West coast of South America differ in length and distance from each other compared to the more frequent fracture zones of the `North Eastern Pacific Basin' between the ancient eastern coastline of Pan and the West coast of North America. These coasts were relatively close and would account for the fracture zones being so close together and more frequent along the whole length, indicating the kind of dislocation required to allow the submergence of the land on one side with the land on the other side remaining intact. (See Map below). 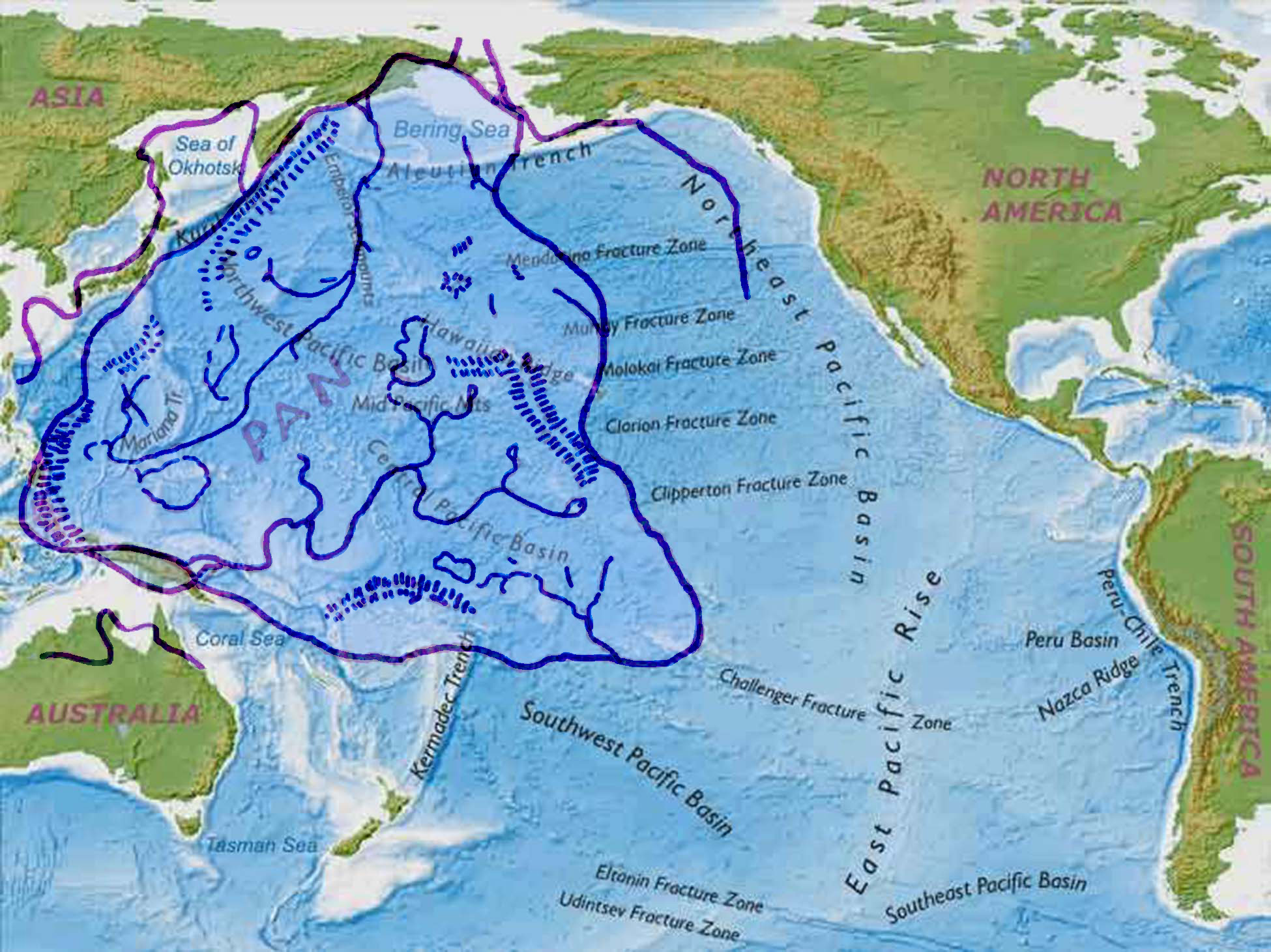 More evidence can be found in the topography where the ancient continent lies beneath the Pacific Ocean. The Oahspe map which shows Pan before it was submerged, indicates it had two long rivers. Their source and direction of flow appear to be from the highlands to the sea. The western river begins at the foothills of the arc of the South Western range and fed by a major tributary from the North Western range more than half way along, leading to the sea in the area of 170.N and 60.E. Along the course of the river there is a large circular lake east of the mountains whose remnants are above sea-level and are known as the islands in the vicinity of Taiwan (including the famous undersea ruins near Okinawa). The almost perfect circle of this lake is apparent in that position on the ocean floor map at 13 E and 155 N. A smaller lake to the North West of the course of the river corresponds to the large low region known as the `Northern Pacific Basin' on the ocean floor map.

The South Eastern River appears to flow from a number of smaller rivers that spring from the foothills along the western side of the Eastern Highlands which now exist as the Hawaiian Ridge, and reaches a large delta area that appears to run into the sea in what is now the vicinity of the Bismarck Arch which is just east of the North Eastern coast of New Guinea. There are various lakes which feed into the tributaries, before joining to flow to the south West, this large lowland area can be seen on the ocean floor maps as the `Central Pacific Basin.

Rivers have their beginnings in mountainous regions, and these mapped in the Oahspe map of Pan are clearly seen to correspond with the undersea mountain ridges of modern ocean floor maps. The Lakes in lowland areas of the map of Pan, correspond with low areas between undersea mountainous areas on the ocean floor maps. These areas were not mapped to any extent before 1977, and even then it required the development of technology such as electro magnetic, sonar and satellite imaging to further define the details now available. Here is validation that Oahspe's map of Pan contained information that would not be mapped as the topography of the ocean floor until more than a hundred years afterward.

While scientists understand that a "cataclysmic" event had to occurr to cause such great quantities of water to find their way into such a vast area of land, the actual event was FAR MORE than a collapse of an underwater mountain ridge and NOT SO LONG AGO in geophysical time. It was no less than the breaking of the earth's crust around a vast ancient continent and a mighty force, unexplainable in geophysical terms, brought to bear upon the land to push it down. This extraordinary event has been described in Oahspe, revealing that the force to accomplish it was wielded by advanced extra-terrestrial beings (etherean Gods and Goddesses) no more than 25,000 years ago. Known also in ancient legends and scriptures as "The Flood".

|| And I divided the line into sections, each with two hundred and fifty ships, and there were one thousand sections. And every ship was contracted ten thousand fold, which was the force required to break the crust of the earth and sink a continent....

And now Aph, Son of Jehovih, said: When the etherean hosts were arranged in due order, I called out to You, O Jehovih, saying: In Your Strength and Wisdom, O Father, join the heavens above with the earth below!

And the end of the etherean column that extended to Chinvat, on the border of the vortex of the earth, was made secure by the pressure of Your wide heavens.

Again I said: In Your Strength and Wisdom, O Jehovih, join the heavens above with the earth below!

And the end of the etherean column that extended down to the earth was made secure around the borders of Whaga, by the sea and the high mountains to the north.

Again I said: O Jehovih, deliver the earth from evil, for Your glory, forever!

And the vortex of the earth closed in from the rim, and lo, the earth was broken! A mighty continent was cut loose from its fastenings, and the fires of the earth came forth in flames and clouds, with loud roaring. And the land rocked to and fro like a ship at sea.

Again I said: O Jehovih, deliver Your heavens, which are bound like a chain, to a rotten carcass.

And again the vortex of the earth closed in on all sides, and by the pressure, the land sank beneath the water, to rise no more....||

All Oahspe references are from the Standard Edition Oahspe of 2007